The primary goal of PREVIEW is to identify the most efficient lifestyle pattern for the prevention of type-2 diabetes in a population of pre-diabetic overweight or obese individuals. The project comprises two distinct lines of evidence, both embracing European and overseas countries:

2) Large population studies using data from all age groups. Focus in both lines of evidence will be on diet (specifically protein and glycemic index) and intensity of physical activity, as well as their interaction with the lifestyle factors, habitual stress and sleeping pattern as well as behavioural, environmental, cultural, and socioeconomic variables.

PREVIEW will significantly increase our knowledge on how specific lifestyle factors can help preventing type-2 diabetes.

The strategic impact of PREVIEW concerns the massive problems associated with the global diabesity epidemic (obesity and type-2 diabetes) and therefore includes partners from Europe (East, West, North and South) and Australia, New Zealand, and Canada. PREVIEW will thereby contribute to improving health over the life-span of the population in Europe as well as worldwide. Overall the public health and socioeconomic impact of PREVIEW is expected to be very significant.

The project is led by Professor Anne Raben from the University of Copenhagen and there are 15 partners in the consortium. The project will run for 6 years starting in January 2013.

Project full title:            PREVention of diabetes through lifestyle Intervention and population studies
in Europe and around the World

PREVention of Diabetes through lifestyle Intervention and population studies in Europe and around the World (PREVIEW) Symposium on the 9-10 April 2019. 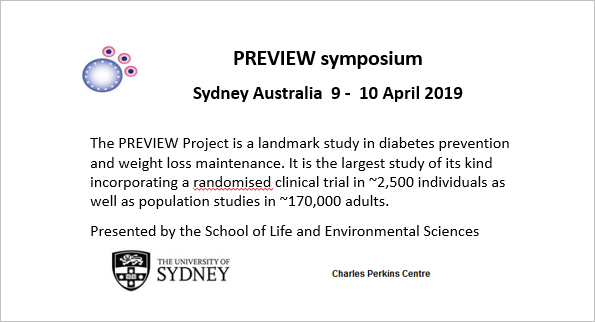 PREVIEW study participant experience, Participants from the PREVIEW Study in Australia talk about their experience after completing the three year program. Click on the image below to see the video.

An Interview with Anne Raben, Professor in the Prevention and Treatment of Obesity at the University of Copenhagen, Denmark, and coordinator of the PREVIEW project. In the context of World Diabetes Day 2016 (WDD 2016), which is celebrated annually on 14 November, Prof Anne Raben highlights in this video the importance of lifestyle interventions in diabetes management and talks about the PREVIEW Project.
Click on the image to see the video.

Mikael Fogelholm, professor of nutrition, and leader of work package 1 in the preview project has been awarded the J.V. Snellman award, for outstanding efforts in disseminating scholarly knowledge.

PREVIEW’S goal is to identify the most efficient dietary and exercise strategies for the prevention of diabetes. This Project is funded by the European Union.