WP 1 is a randomized, controlled, multicentre trial of 3 years duration lead by Professor Mikael Fogelholm from the University of Helsinki. The effect of two diets and two exercise strategies on the development of diabetes over 3 years will be compared in 2500 individuals with impaired glucose tolerance and other risk factor for type 2 diabetes. Subjects will lose 8% of their initial body weight with a formula diet programme (Cambridge Weight Plan) before starting the diet and exercise programmes.

WP 2 consists of population studies lead by Professor Edith Feskens from the University of Wageningen. Itwill evaluate whether the intake of protein and glycemic index (GI), as well as physical activity, is predictive of the development of diabetes and its cardiovascular consequences in the pre-diabetic part of the population (all ages and both genders).

WP 3 will evaluate the role of sleeping pattern, chronic stress and neural changes in the development of type 2 diabetes in pre-diabetic subjects – and their interaction with diet and physical activity.  It is lead by Professor Margriet Westerterp-Plantenga From the University of Maastricht.

WP 4 will explore other lifestyle variables, including behavioural, social, environmental, cultural, socio-ecological and socio-economic components on the development of type 2 diabetes in pre-diabetic subjects.  It is led by Professor Wolfgang Schlicht from the University of Stuttgart.

WP 5 will ensure dissemination and exploitation of the findings of PREVIEW.  It is led by Professor Jennie Brand-Miller from the University of Sydney.

WP 6 Management and co-ordination of the entire project rests with Professor Anne Raben at the University of Copenhagen.

The PERT diagram illustrates the interaction between the Work Packages in PREVIEW. 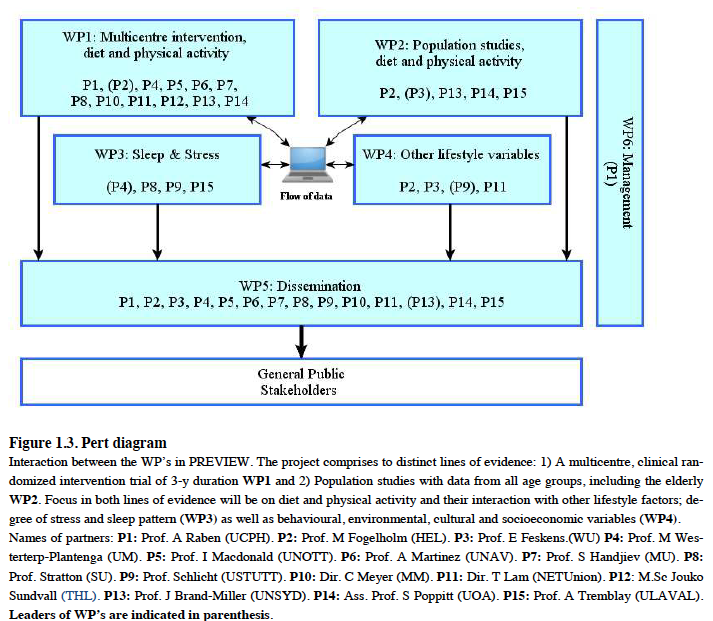